PYA Waltman Capital LLC grew its stake in shares of Cisco Systems, Inc. (NASDAQ:CSCO – Get Rating) by 445.4% in the 1st quarter, HoldingsChannel reports. The firm owned 769 shares of the network equipment provider’s stock after acquiring an additional 628 shares during the quarter. PYA Waltman Capital LLC’s holdings in Cisco Systems were worth $43,000 at the end of the most recent quarter.

Cisco Systems (NASDAQ:CSCO – Get Rating) last announced its earnings results on Wednesday, May 18th. The network equipment provider reported $0.78 EPS for the quarter, topping the consensus estimate of $0.77 by $0.01. Cisco Systems had a net margin of 23.28% and a return on equity of 31.22%. The firm had revenue of $12.84 billion for the quarter, compared to the consensus estimate of $13.33 billion. During the same quarter last year, the firm posted $0.75 EPS. As a group, analysts expect that Cisco Systems, Inc. will post 3 earnings per share for the current year.

Cisco Systems, Inc designs, manufactures, and sells Internet Protocol based networking and other products related to the communications and information technology industry in the Americas, Europe, the Middle East, Africa, the Asia Pacific, Japan, and China. It provides infrastructure platforms, including networking technologies of switching, routing, wireless, and data center products that are designed to work together to deliver networking capabilities, and transport and/or store data.

Want to see what other hedge funds are holding CSCO? Visit HoldingsChannel.com to get the latest 13F filings and insider trades for Cisco Systems, Inc. (NASDAQ:CSCO – Get Rating). 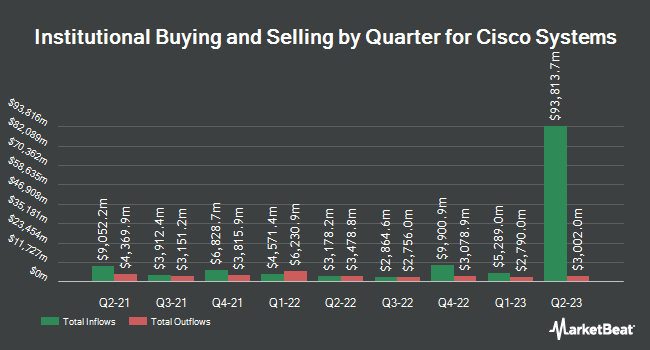 Complete the form below to receive the latest headlines and analysts' recommendations for Cisco Systems with our free daily email newsletter: