Ambarella (NASDAQ:AMBA – Get Rating) had its target price boosted by Stifel Nicolaus from $76.00 to $90.00 in a research report released on Monday morning, The Fly reports.

Ambarella (NASDAQ:AMBA – Get Rating) last announced its earnings results on Tuesday, August 30th. The semiconductor company reported ($0.51) earnings per share for the quarter, missing analysts’ consensus estimates of ($0.44) by ($0.07). Ambarella had a negative return on equity of 6.88% and a negative net margin of 12.14%. The business had revenue of $80.90 million during the quarter, compared to analysts’ expectations of $80.21 million. During the same quarter in the previous year, the firm earned ($0.18) EPS. Ambarella’s quarterly revenue was up 2.0% on a year-over-year basis. On average, sell-side analysts expect that Ambarella will post -1.55 EPS for the current year. 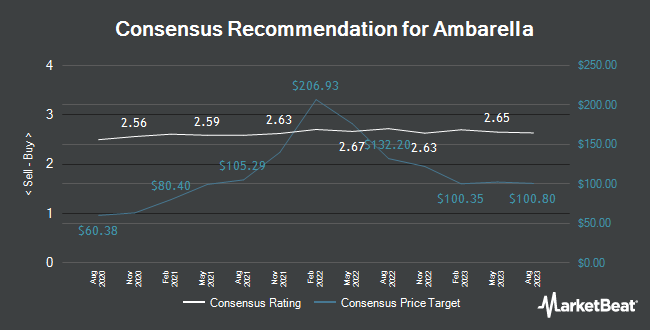 Complete the form below to receive the latest headlines and analysts' recommendations for Ambarella with our free daily email newsletter: