LCNB Corp. (NASDAQ:LCNB – Get Rating) declared a quarterly dividend on Monday, January 23rd, Zacks reports. Shareholders of record on Wednesday, March 1st will be paid a dividend of 0.21 per share by the bank on Wednesday, March 15th. This represents a $0.84 annualized dividend and a yield of 4.73%. The ex-dividend date of this dividend is Tuesday, February 28th.

LCNB has been the subject of several research analyst reports. Janney Montgomery Scott began coverage on LCNB in a report on Wednesday, November 30th. They set a “neutral” rating and a $19.00 price target for the company. StockNews.com cut LCNB from a “strong-buy” rating to a “buy” rating in a report on Thursday, December 1st.

LCNB Corp. is a financial holding company, which offers commercial and personal banking services. It offers services such as checking rates, debit card resources, electronic banking, fraud and identity theft, education and awareness. The company was founded in December 1998 and is headquartered in Lebanon, OH. 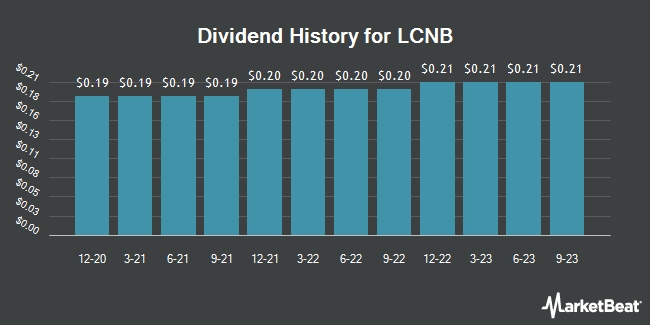 Receive News & Ratings for LCNB Daily - Enter your email address below to receive a concise daily summary of the latest news and analysts' ratings for LCNB and related companies with MarketBeat.com's FREE daily email newsletter.

Complete the form below to receive the latest headlines and analysts' recommendations for LCNB with our free daily email newsletter: