Tesla Under Fire For Suspension Issues 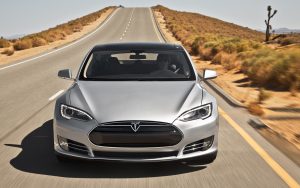 The National Highway Traffic Safety Administration’s is reportedly investigating Tesla (NASDAQ:TSLA) over a potential safety issue in the company’s Model S sedans. The safety regulator is examining the Model S suspension system for possible defects that could be causing premature failures. Tesla began deliveries of the four-door Model S sedan four years ago. The vehicles have a starting price of about $70,000 and can cost more than $100,000.

Since October, the NHTSA has reported receiving 33 complaints of suspension parts breaking. These claims are alarming as a suspension failure can cause severe steering problems and make driving impossible. The agency said it is reviewing the springs, joints and other components that connect the car to its wheels for potential problems. Tesla officials there is no safety defect in either its Model S sedan or Model X crossover, the only two models the company currently sells.

The company is also under fire over having customers sign “non disclosure agreements” that could impede reporting of the issues arising with its vehicles. A few of the complaints received by the agency pertained to a requirement that owners sign confidentiality agreements in exchange for having their cars repaired. Bryan Thomas, an agency spokesman said, “The agency immediately informed Tesla that any language implying that consumers should not contact the agency regarding safety concerns is unacceptable, and NHTSA expects Tesla to eliminate any such language.”

Tesla has disputed the claims made by the agency and says that the whole issue was “fabricated” by a blogger. It says the issue stems from a single incident involving a car with more than 70,000 miles on the odometer that had unusual and extensive rust on a ball joint. Tesla also claims that it has regular contact with NHTSA and proactively reports defects. On its website, the company said in a blog posting, “There is no car company in the world that cares more about safety than Tesla and our track record reflects that.”

Many safety advocates would not agree with Tesla’s assessment. Two years ago, the safety administration looked into two instances in which Model S cars caught fire. Tesla ultimately agreed to reinforce the shield that protects the battery and the agency closed the matter. Tesla’s first model, the two-seat Roadster produced from 2008 to 2011, was beset with safety problems that damaged the company’s image with consumers. Earlier this year, the company’s Model X SUVs were recalled because of a problem with its rear seats.