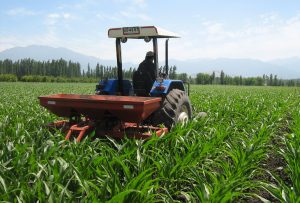 Regulators in California have taken a big step toward requiring popular Roundup, the weed killer, to have a warning label.

Officials announced beginning July 7, the main ingredient of the weed killer, glyphosate will be on the list the state of California keeps of potentially cancerous chemicals. One year later, the listing may require warning labels on products that contain ingredients on the list, said officials.

However, it is not certain whether the product will eventually be required to have a warning label or not.

Monsanto, the maker of the chemical, filed an appeal following its loss in court when it attempted to block any labeling, arguing that the product does not cause cancer and the labels will hurt the company’s sales.

Health regulators in California must decide as well if there is a large enough amount of chemical contained in Roundup that could pose a risk to the health of humans. Officials in the state received over 1,300 comments from the public related to the product and the chemical.

A spokesperson for the state’s regulators the Office of Environmental Health Hazard Assessment said the group is reviewing all the comments.

Glyphosate does not smell or have any color. Monsanto introduced the chemical during 1974 as a way of effectively killing weeds while at the same time leaving plants and crops unscathed.

It is now sold in over 160 countries and is used by farmers on 250 different crops in California, the leading farming state in the U.S.

An attorney who represents over 300 individuals who claim that a loved one became sick and or died from being exposed to Roundup, said the fight to keep protecting Californians is still not over.

The attorney added that the failure by the state to set a risk level that was proper would undermine the protections put into place by California of listing chemicals that are harmful.

A vice president for Monsanto said through a prepared statement that glyphosate is not cancer causing and that there was no need to have it listed on the list of harmful chemicals in California.

He added that the decision handed down was not the final step in this process and that the company would continue to challenge in an aggressive manner the improper decision that was made by the regulators.