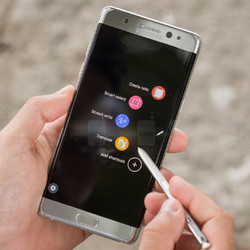 The largest smartphone maker in the world, Samsung, said it was bringing back its Galaxy Note 7 in a less expensive, refurbished version starting Friday in South Korea.

The giant electronics maker has decided to change the phone’s name, due to the problems it encountered with the first launch when customers reported devices bursting into flames.

The new revamped model will be called Galaxy Note FE, which is abbreviated from Fan Edition. To help convince those who might be hesitant to invest in the new phone Samsung added some perks.

The biggest factor is the new Note FE will have lower capacity batteries that completed a safety test carried out by the company.

Earlier in 2017, Samsung blamed the poor designed and manufactured batteries for overheating problems that in turn caused the fires in some of the Note 7s.

The new FE will have a price of 669,600 won or $610 which is close to 30% less than its predecessor and comes with updated software as well as Bixby, the new Samsung artificial intelligence assistant.

However, fans of the Note 7 not in South Korea will be waiting longer to have the new FE. Samsung announced that it has not decided yet when it will start sales in other countries. The South Korea based company said during the past that it did not have plans to sell the refurbished devices in the U.S.

The Note FE will start on sale Friday in South Korea. Samsung has touted the new devices, which are made out of unused Note 7 phones with spare parts, as a project that is eco-friendly to avoid any waste.

It was pressured in 2016 by Greenpeace to provide information on how it would be disposing of the millions of Note 7s that were recalled.

The new Note FE should be of help to Samsung in recouping some losses that resulted from the Note 7 that wipe out billions of dollars in profit.

However, with a run that is very limited of just 400,000 to start, it is only a drop in the sea, considering that Samsung sells millions of phones each time a new version is launched, said an industry analyst located on Seoul.

Samsung has been resilient following the debacle with the Note 7, reporting profits of close to $9 billion for its 2017 first quarter, a jump of nearly 50% from the same period last year.