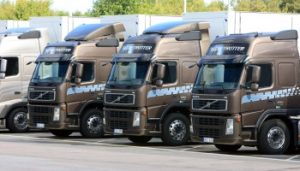 Volvo the truck maker based in Sweden raised its North American forecast on Wednesday following a strong quarter that saw its order intake increase across the entire group.

The company’s adjusted operating income ended the quarter higher at 8.54 billion Swedish crowns equal to $1.03 billion compared to 6.13 billion crowns and beat the forecast of 8.48 billion by analysts.

The group, which sells namesake trucks along with brands like Renault, UD and Mack, saw its order intake increase by 22%, which beat the increase of 12% that analysts had forecast.

Stock at Volvo, which competes against Daimler and Volkswagen from Germany, has increased by close to 40% in 2017 on strong demand and higher margins after cost cutting measures of nearly 10 billion crowns.

Volvo has benefitted from the demand in Europe for its heavy-duty trucks at levels that are historically high and there are increasing signs of an uptick across North America.

The company through a prepared statement said the recent truck market trends continue with strong demand across Europe, including recoveries in Russia and the gradual improvement in both North and South America.

The largest corporation in Sweden by revenue increased its sales outlook for 2017 in North America for heavy trucks from 215,000 to 225,000 and kept the same guidance for robust sales industry wide in Europe.

With strong demand, Volvo said that its supply chain was stretched and weighed on its margins for the truck division while its business of construction equipment, which represents a 20% turnover, helped buoy its earnings.

The drop in profitability in the truck business pulled down Volvo shares during early trading by 3.6% in Europe.

Overall, Volvo, based in Gothenburg, posted a 9.7% adjusted operating margin during its second quarter, which was up from 7.8% during the same quarter one year ago and in line with expectations of analysts.

The big positive, said one analyst is that the order intake for Volvo shows such strength.

The question is whether the market will focus on the softer margin it has in trucks or the continuation of very strong orders across Europe, said an analyst in London.

Volvo is the first major maker of trucks in Europe to release results from the second quarter, with Volkswagen and Daimler along with Iveco truck maker CNH Industrial all reporting next week. Paccar Inc. based in the U.S. whose brands include Kenworth and Peterbilt will also reports its earnings next week.