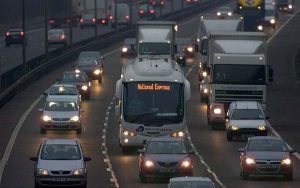 The UK became Europe’s latest country to put a deadline on the making of gasoline and diesel fueled cars as automakers like Volvo are racing to make electric vehicles or face being left behind.

The government in London said it would ban the sales of fossil-fuel powered vehicles in 2040. This came after France two weeks ago announced a plan of a similar nature to lower air pollution and become a nation that is carbon-neutral.

For the automotive industry, bringing to an end the era of vehicles powered by fossil-fuels poses a big challenge that not all are welcoming.

A CEO at an association for traders and manufacturers of motor vehicles said the UK’s successful auto industry could be undermined if not enough time is allowed for the entire industry to make adjustments.

He added that outright bans place a risk of undermining the market for new vehicles and the industry that supports more than 800,000 jobs in the UK.

Mercedes-Benz maker Daimler AG said it was important to shore up diesel as that powers most of its lucrative SUVs and large sedans, but others have embraced what is taking place.

Volvo Car Group, based in Sweden, said that before the end of 2019 all its new cars will be either powered by a hybrid motor or full electric motor, while Germany’s BMW AG is building an electric version of the Mini compact in Britain.

The shift globally toward vehicles that are electric powered will create a big upheaval across many sectors from oil companies hit by less demand for gasoline to fuel vehicles to makers of fuel injectors and spark plugs, whose products will not be needed for electric powered vehicles.

The decision for the UK was brought on in part by the strict emission rules of the European Union that must be followed by the country even as it readies to leave the 28-nation bloc.

The UK’s environment secretary said that the country could not carry on using gasoline and diesel powered vehicles. It is very important, he added that everyone gears up for the big change which deals not only with health problems emissions cause, but broader problems related to the accelerating of climate change.

The push related to the environment comes at a time the UK is planning to invest over £800 million or $1 billion in zero-emission and driverless technology and it outlined plans for the investment of £246 million in research on battery technology.

Marvell Technology, Inc. Given Consensus Recommendation of “Buy” by Analysts