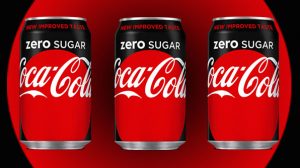 Coca-Cola announced on Wednesday that it was stopping the production in the U.S. for Coke Zero its no-calorie carbonated soft drink and would replace it with Coca-Cola Zero Sugar it new calorie-free drink.

The soda will begin reaching store shelves during August. The rollout arrives as Coca-Cola says that sales of its no- and low-sugar beverages are increasing. Coca-Cola Zero Sugar was tested in 25 markets across the globe during 2016 including Britain and Mexico.

Senior Vice President of Coca-Cola’s Marketing in North America, Stuart Kronauge said in a prepared statement that the company is confident its new and improved soft drink recipe delivers great taste and one that Coke Zero drinkers across the U.S. will enjoy.

The statement added that Coca-Cola hopes that people who love the great taste of Coca-Cola, but prefer less sugar, will try Coca-Cola Zero Sugar and enjoy it.

Coca-Cola’s new soda does not have sugar or calories, and has approximately the same amount of caffeine as did Coke Zero, said company officials.

The beverage maker said that to ensure there would be a seamless introduction it had tested its recipe with consumers in the U.S. for over one year.

In addition, on Wednesday the company announced its results for the second quarter.

The beverage behemoth based in Atlanta, Georgia said for its quarter ending June 30, it had earnings of $1.37 billion equal to 32 cents per share.

That figure was down from its earnings of $3.45 billion equal to 79 cents per share for the same three-month period one year earlier.

Earnings, adjusted for one-off costs, reached 59 cents per share, which were higher than analyst’s estimates of 57 cents.

Revenue was $9.7 billion, which was 16% lower than the $11.54 billion from the same quarter last year due to problems with updating bottling facilities and unfavorable rates in currency exchange. Analysts were expecting $9.71 billion.

Coca-Cola’s total sales volume across the globe was flat. Sales for dairy, juice and plant based drinks increase 3%, coffee and tea were up 2%, sports drinks and water up 1% and sparkling soft drinks were flat.

Coca-Cola is anticipating per share earnings for the full year to be flat or lower by 2% compared to the $1.91 per share of last year. Its outlook previously was for its results to be down between 1% and 3%.

On Wednesday, following the news, Coca-Cola shares were up 1.1%.