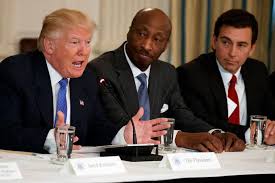 On Monday, CEO at Merck & Co. Kenneth Frazier has resigned from his seat on the American Manufacturing Council established by United States President Donald Trump. Frazier said he resigned due to extremism and intolerance.

Over the weekend, a gathering in Virginia of hundreds of white supremacists became deadly Saturday when a car drove into a number of counter protestors nearby killing one person and injuring nearly 20 others.

After the incident, Trump said that many sides had been involved which immediately drew fire from across the entire political spectrum for not denouncing in specific terms the far right.

Frazier in a tweet that announced he had resigned from the council said that leaders in America need to honor the fundamental views by making a clear rejection of expression of bigotry, hatred and group supremacy, which he said runs counter to the our ideal that all people are created equal.

President Trump wasted little time by releasing his own tweet that said Frazier from Merck Pharma had resigned his seat from the President’s Manufacturing Council, so he should have more time to reduce the ripoff drug prices.

Several corporate executives from top companies in the U.S. have resigned from many of the different presidential advisory councils in protest of the policies established by Trump’s administration.

Robert Iger the CEO at Walt Disney and Elon Musk the CEO at Tesla left the Strategy and Policy Forum established by Trump. The forum is an advisory group. The two resignations from the business advisory group come after the president said he was withdrawing from the climate accord of Paris. Musk left the manufacturing council as well.

Former CEO at Uber Technologies Travis Kalanick quit an advisory council during February amidst pressure from employees and activists who opposed the immigration policies of the administration.

Earlier this summer, Trump spoke about presidential action he might take on the pricing of drugs to address the high costs of prescriptions drugs that have increased over the past few years.

Trump announced at the time that today’s drug makers were getting away with murder. His comments came in January during one of his news conferences.

No word has been released if other CEOs of private businesses that sit on one of the president’s councils have decided to resign in protest of his comments made Saturday.