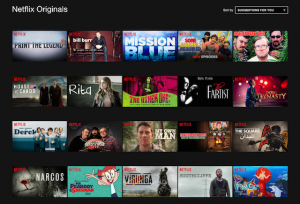 Video streaming behemoth Netflix’s hundreds of millions of subscribers are going to have a plethora of new original series and shows to watch over the upcoming few years. It said it has obligations of $15.7 billion committed to deals for streaming content.

Netflix CEO Reed Hastings announced during a recent conference that $6 billion of the close to $16 billion would be for just 2017.

Netflix has already begun to increase its fees for monthly subscriptions in certain markets.

It clearly must differentiate itself as many media companies, especially those like Disney, start looking at it as a foe and not a friend. That translates to Netflix likely spending more for content to replace some it will lose one day.

Last week, it was announced by Disney that it would begin its own streaming service in less than two years. Disney will eventually take away a number of its Disney movies as well as television shows from Netflix for its new streaming venture, which is not yet named.

Even though the Star Wars series is owned by Disney, Netflix is the one striking back. Netflix countered Disney’s announcement with a move that quite possibly hurt ABC the national network owned by Disney.

Netflix signed the well-known writer and creator Shonda Rhimes, who is responsible for hits such as Scandal, Grey’s Anatomy and others, to a deal of a number of years. Terms of the deal with Rhimes were not disclosed.

It is logical that Netflix may have to increase its monthly rate for subscriptions to help pay for the current programs and any new ones.

In the just released quarterly earnings, Netflix announced that it expected that at time to time prices of memberships might change from country to country.

Across the U.S., Netflix currently has pricing on three tiers. A basic plan for streaming is $7.99 per month, while a standard streaming plan costs $9.99 and its premium plan $11.99.

So one more price hike in the U.S. would likely not come in the short term, no matter what Netflix is spending for shows being produced by Rhimes.

However, the company might not be pressured into raising subscription prices that much or anything if it continues to add subscribers, and taking in more revenue as well as churning out profits.

Netflix should report more than an increase of 25% in sales during 2017, and earnings that will be doubled.