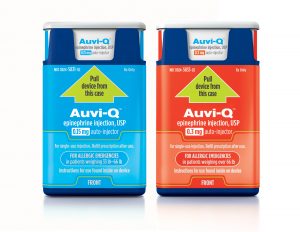 An EpiPen rival will be returning to the market next year as a cheaper alternative to the lifesaving device. Kaléo announced on Wednesday that they would bring the Auvi-Q back in the first half of 2017. Like the EpiPen, the Auvi-Q will inject an emergency dose of epinephrine in the event of a severe allergic reaction.

Chief executive Spencer Williamson said the company was working hard to ensure the product would be affordable. Mr. Williamson said in his statement, “We believe that patients should be able to obtain the product without insurance barriers or high out-of-pocket costs. That’s our focus.”

The Auvi-Q first came on the market in 2013. Kaléo licensed the Auvi-Q to Sanofi and within a couple of years, the device had about 10 percent of the market. The product’s ultimate selling point was its convenient design. The Auvi-Q is easier to carry than an EpiPen because it is smaller, roughly the size of a credit card and the thickness of a cell phone. The Auvi-Q also instructs users how to give an injection with recorded voice messages and patients never actually see its retractable needle.

When the Auvi-Q was taken off the market last year, it cost more than the EpiPen. In late 2015, its list price was about $500 for a pack of two. However, the list price of drugs does not reflect rebates that drug manufacturers give to insurers and employers. Those rebate amounts are not made public in most cases. In Auvi-Q’s best year, 2015, the device was prescribed 353,589 times, compared to 3.4 million prescriptions for EpiPen.

Williamson says Kaleo will offer Auvi-Q at an affordable price even to patients without health insurance. That is welcome news to many in Congress that have been decrying the high costs of lifesaving medications. Representative Elijah E. Cummings of Maryland said, “Increased competition is certainly good news. But we need much greater transparency over the massive profits these companies are making in order to ensure that the American people have affordable access to these lifesaving drugs.”

Many patients and lawmakers have denounced the rising price of EpiPens and the lack of competition for the devices. Last month, EpiPen’s manufacturer, Mylan, cited the debut of the Auvi-Q as one factor in raising its own prices. Mylan recently announced a generic version of the EpiPen is expected to be available before the end of the year.

Kaléo is currently offering no details on its pricing strategy and says it is still negotiating with pharmacy benefits managers to determine how the Auvi-Q would be covered. The list price for the Auvi-Q has not yet been determined.