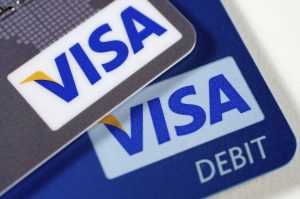 The company posted revenue of $4.26 billion in the period. The majority of Visa’s revenue comes from charging a fee for every transaction processed on their network. Operating expenses rose 27 percent to $1.64 billion.

The recent purchase of Visa Europe helped the company’s results. The company purchased its European operations in June in a deal initially valued at up to $23.4 billion. Visa now has its global operations under one roof and its purchase has reached the integration phase. Chief Executive Charles Scharf said, “We have begun to see the benefits from our acquisition of Visa Europe and strong cost discipline helped our results.”

The credit card processing giant increased the number of payments processed on its namesake network from the year ago quarter. Visa processed $1.857 trillion on its payment network in the quarter, an increase of 47 percent from a year earlier. The $467 billion processed on the Visa Europe network in the quarter was included in the figure. The United States accounted for about 41 percent of the total payments volume in the latest quarter, while Europe accounted for about 25 percent. Cross-border volumes increased 149 percent in the quarter.

Visa also reported its full-year results on Monday. Visa earned $5.99 billion during its fiscal year, which runs Oct. 1 to Sept. 30. This was down from $6.33 billion reported in the previous fiscal year. On a per-share basis, Visa earned $2.48 for the full year compared with $2.58 per share a year earlier.

Visa said it expects full-year 2017 earnings to grow in the mid-teens on an adjusted basis and net revenue to grow in the range of 16-18 percent. Analysts estimated a 19 percent increase in earnings to $3.32 a share and 20 percent increase in revenue to $18 billion. Visa’s shares fell 1.2 percent in after-market trading to $82.19. Up to Monday’s close, they had risen about 7.24 percent this year. MasterCard, Visa’s closest rival, is scheduled to report its fourth-quarter results on Oct. 28.

Visa is facing intense competition from new financial-technology companies. To compete, the company has been ramping up its digital efforts. It is an investor in mobile-payments startup Square Inc. and entered into a partnership with PayPal Holdings Inc. in July. It also announced the launch of a bitcoin-style network called Visa B2B Connect last week. Visa is also dealing with the unexpected announcement made last week that CEO Scharf would retire at the end of the year.