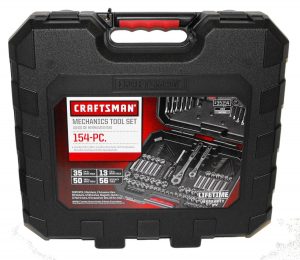 Sears Holdings Inc. (NASDAQ:SHLD) has sold the 90-year-old Craftsman brand to Stanley Black & Decker Inc. (NYSE:SWK) in a $900 million deal. The agreement calls for Stanley to pay $525 million when the deal closes and another $250 million after three years. Stanley will also pay Sears a percentage of its new sales of Craftsman products for 15 years. During that time, Sears will be able to continue selling Craftsman products royalty-free. The deal is expected to close later this year.

Sears doesn’t actually make any Craftsman products, contracting with various manufacturers that produce products with the Craftsman name. About 90 percent of Craftsman sales occur at Sears, Sears Hometown and Kmart stores. Ace Hardware stores account for much of the rest.

Just 35 percent of Craftsman’s sales come from tools. Much of the rest comes from lawn-and-garden equipment and other product lines, like garage-door openers. Craftsman still accounted for the largest share (26.6 percent) of the hand tools and accessories market by dollar share, as of September. The brand also accounts for about 8.3 percent of portable power tool sales.

Stanley Chief Executive James Loree said, “We already manufactured many products cost-effectively in this country and in some cases, we’ve been able to bring manufacturing back to the U.S. at a lower cost than producing overseas.” In the U.S., Stanley has increased its manufacturing head count by 40 percent in the past three years.

Stanley has spent the past seven years acquiring the biggest brands in tools. Stanley Works acquired Black & Decker Corp. for $4.5 billion in stock in 2009. Then, Stanley Black & Decker bought Hong Kong-based Infastech for $850 million in cash in 2012. In October of last year, the company bought Newell Brands Inc.’s tools business, including Irwin and Lenox, for $1.95 billion. The Stanley portfolio also includes Mac Tools for auto mechanics and the DeWalt brand.

The acquisitions have paid off for Stanley’s shareholders. Since the merger of Stanley and Black & Decker, the company’s stock has more than doubled in value. The market value of Stanley Black & Decker now sits at roughly $18 billion.

The sale by Sears is just the latest in a recent flurry of moves to generate cash after five money-losing years. Sears is also trying to raise another $1 billion by selling off real estate. Last week, affiliates of the hedge fund managed by Sears’ chairman, CEO and biggest investor, Edward Lampert, extended a standby letter of credit to Sears for up to $500 million to fund operations.