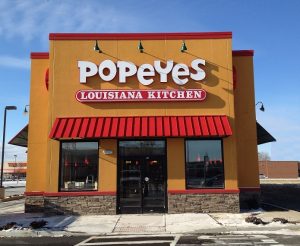 Restaurant Brands International (NYSE:QSR), owner of Burger King and Tim Hortons, has announced that it will be adding Popeyes Louisiana Kitchen (NASDAQ:PLKI) to its portfolio of brands. Restaurant Brands International CEO Daniel Schwartz said of the deal, “With this transaction, RBI is adding a brand that has a distinctive position within a compelling segment and strong US and international prospects for growth.” The transaction is expected to close by early April 2017.

RBI has agreed to pay $79 per share, or $1.8 billion, for Popeyes. The offer price represents a 27 percent premium to the company’s 30-trading day Volume Weighted Average Price as of February 10, the last trading day before the media disclosed the potential deal. RBI said that the deal will be financed with cash and a loan from JPMorgan and Wells Fargo. The transaction is subject to customary closing conditions and must be approved by regulators.

Founded in New Orleans in 1972, Popeyes is now one of the world’s largest quick service chicken restaurants. The company is known for its Southern-inspired menu, featuring fried chicken and seafood. The average Popeyes location has $1.4 million in annual revenue.

Popeyes’ growth opportunities led Restaurant Brands to pay a relatively high takeover price. The company has over 2,600 restaurants in the U.S. and 25 other countries around the world. While Popeyes has a presence across the country, most locations are concentrated in just 11 states. The majority of Popeyes’ international franchised restaurants are in Turkey, South Korea and Canada.

Restaurant Brands CEO Daniel Schwartz said, “The key to long-term success at Popeyes will be a focus on guest satisfaction and franchise profitability.” After the closing of the transaction, Popeyes will continue to be managed independently in the U.S. Sales at Popeyes stores open at least a year rose 1.7 percent for the fiscal year ended Dec. 25, lower than the 5.9 percent growth reported for 2015. The company opened 216 net new stores in 2016 after opening 219 in 2015.

RBI plans to continue developing the brand in the U.S. and international markets. About 97 percent of Popeyes restaurants are franchises and their profitability averaged $340,000 per location in 2015. It remains unknown whether RBI plans to close any locations or cut any jobs.

Restaurant Brands International was formed in Canada when Burger King merged with Tim Hortons in 2014. RBI’s existing portfolio contains over 20,000 restaurants in more than 100 countries and U.S. territories.

AXEL Trading Up 6.8% Over Last Week