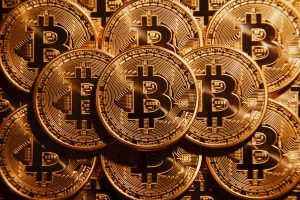 The value of Bitcoin is at all-time high, surpassing its previous peak established in November 2013. The digital currency’s value hit $1,206.60 per coin Friday, according to the CoinDesk Bitcoin Price Index. At its prior peak, the currency was trading at $1,163 per coin. There is now more than $18 billion of the digital currency in circulation, up from $13 billion four years ago.

The value of bitcoin has already risen about 17 percent this year. Daily bitcoin transaction volume has averaged $250 million a day in 2017, up 55 percent from 2016. Over the past year, bitcoin’s biggest daily moves have been about 10 percent, far lower than the daily swings of up to 40 percent seen in 2013.

The increase in value has been driven in part by speculation that the creation of the first bitcoin-focused exchange-traded fund may soon be authorized by the Securities and Exchange Commission. A decision on the Winklevoss Bitcoin Trust, a proposed ETF filed almost four years ago by Cameron and Tyler Winklevoss, is expected by March 11.

If it is approved, a flood of institutional money is expected to enter the ecosystem. Traditional financial players have largely shunned the currency, viewing it as too complicated and risky. Some analysts say regulatory approval of a bitcoin ETF would make the currency relatively attractive to the institutional investor market. It could entice large banks and brokerages to become involved in the market.

The barriers to widespread bitcoin adoption appear to be falling away. Chinese authorities appear to be seeking to properly regulate the currency rather than seek to kill its swiftly developing bitcoin ecosystem. Actions taken include encouraging local exchanges to implement new transaction fees on the currency, upgrading anti-money-laundering systems to prevent market manipulation, and ensuring the exchanges comply with all local financial laws.

Also, a Japanese law providing a regulatory framework for the bitcoin industry is scheduled to take effect in April. Japan recently surpassed China as the world’s largest bitcoin market by trading volume. Even Goldman Sachs has invested in the currency.

The Commodity Futures Trading Commission decided in 2015 to classify bitcoin as a commodity, but it is still considered a fringe currency by most. There are currently more than 50 exchanges operating world-wide, but there is no one consolidated bitcoin price, leading to disparities in prices denominated in different fiat currencies. As one example, the Chinese yuan price of a bitcoin is presently lower than the U.S. dollar price.