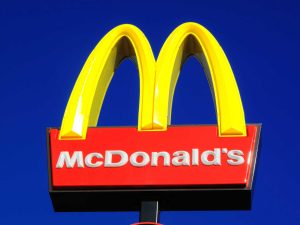 McDonald’s Corp. (NYSE:MCD) is beta testing mobile ordering at 29 restaurants in Monterey and Salinas, Calif., this week. Next week, the testing will expand to 51 more restaurants in Spokane, Wash. The local pilot tests are designed to get customer feedback on the new service. The chain is preparing for a national launch of mobile ordering later this year.

Starting this week, consumers will have the ability to order and pay at participating McDonald’s restaurants via phone. Customers choose their restaurant through the app and the app alerts the restaurant when the customer is nearby through geofencing technology. Their food is only prepared when they’re physically near the store, limiting the amount of time the food will be under the heat lamps.

Customers can choose where they get their food: through the drive thru, at the front counter or through curbside pickup. At the drive-thru, customers simply give the order code to the crew, then pull forward to the pick-up window. The company believes that mobile ordering will improve the efficiency inside of its restaurants and through the drive thru. According to company executives, McDonald’s could save 15 seconds per order if 20 percent of drive-thru customers ordered curbside and another 20 percent ordered via mobile.

McDonald’s is planning on adding both mobile ordering and curbside pickup to its 14,000 restaurants this year. Another 6,000 restaurants in Canada, the U.K., France, Germany, Australia and China will also receive the technology by year’s end. Julia Vander Ploeg, McDonald’s vice president of the U.S. digital unit, said in a statement, “We look forward to learning from our customers in these markets as they order ahead, pay with the app and choose one of various ways to pick up and enjoy their favorite McDonald’s foods.”

The beta test is one of many current tests on food and service styles at McDonald’s. An expanded version of the McCafé beverage program has been launched in California. In Florida, McDonald’s has started testing delivery with UberEats. Its kiosk-based Experience of the Future format is also expected to roll out to more restaurants this year.

A number of McDonald’s quick-serve restaurant competitors have introduced mobile ordering capabilities into their apps, including Starbucks, Chipotle, Dunkin Donuts, Taco Bell, and Chick-fil-A. Many major pizza delivery chains also allow customers to order on mobile. A lack of mobile ordering capabilities may have hampered McDonald’s growth. Last month, the company reported that it had lost 500 million transactions since 2012.