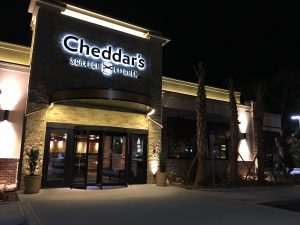 Darden is purchasing the chain from private equity firms L Catterton and Oak Investment Partners. Founded in 1979 in Arlington, Texas, Cheddar’s was bought by Catterton and Oak in 2006, when it had just 55 locations. Cheddar’s would become Darden’s third-biggest brand with 165 locations across 28 states. Of that number, 140 are owned by the company and 25 are franchised.

Cheddar’s enjoys a high volume per restaurant. According to Darden, each location averages $4.4 million a year. Darden Chief Executive Officer Gene Lee said that the strong annual volume per restaurant was key to the acquisition. Lee said, “Cheddar’s is an undisputed casual dining value leader with broad appeal and strong average restaurant volumes. Cheddar’s is a great fit in the Darden portfolio because it complements our existing brands.”

Investors are betting the acquisition will help reinvigorate the company. Its focus on food “made from scratch” may help appeal to consumers seeking healthier options. Ian Baines, CEO of Cheddar’s, will remain President of Cheddar’s and report to Lee. The completion of the transaction is expected to occur in Darden’s fiscal 2017 fourth quarter and is subject to customary closing conditions.

Darden also announced that it had topped earnings estimates for the third quarter of its fiscal year. On an adjusted basis, earnings for the quarter were $1.32 a share, beating the $1.27 average estimate for the period. The Orlando, Florida-based company also boosted its earnings outlook for the year to $3.95 to $4 a share. It expects same-store sales to increase about 1.5 percent.

Darden’s stock gained the most in more than three years after the announcements. The shares gained as much as 9 percent in New York trading, rising to $82.36. That’s the biggest intraday gain since October 2013. As of Monday’s close, the stock was up 3.9 percent this year.

The Blackstone Group Inc. Given Consensus Recommendation of “Buy” by Analysts