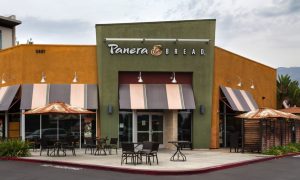 Reports have surfaced that Panera Bread (NASDAQ:PNRA) is exploring a possible sale. According to sources close to the company, Panera is working with advisors to look over strategic options after receiving takeover interest. Potential suitors could include JAB Holding Co., Starbucks Corp. and Domino’s Pizza Inc., according to people with knowledge of the matter.

There’s no indication that a deal of any sort will be reached in the near future, said one of the people, who asked not to be named discussing the private process. When asked about the reports, Panera Chief Financial Officer Michael Bufano said, “As a matter of policy, we never comment on rumors or speculation.” The bakery chain has a market value of about $6.5 billion.

Panera began as St. Louis Bread, a regional restaurant chain known for its fresh ingredients and inviting environment. Founder Ron Shaich changed its name to Panera, which is Latin for “bread basket” or “bread bowl,” to appeal to a wider audience. Shaich chose to step aside as CEO in 2010, retaining the role of executive chairman, returned to Panera as chairman and CEO in 2013. Panera’s stock has returned more than 3,900 percent under his leadership.

Panera has become one of the largest chains in the fast casual segment, mainly due to its reputation as a healthy brand. The company sells breads, pastries, soups, salads and sandwiches and does not use artificial additives and preservatives in its foods. The goal took years of meticulous work to achieve. In 2015, it released its “No-No list,” which banned 150 ingredients from its products, including lard and sucralose.

Panera could become the fourth major restaurant chain to be purchased this year. Oak Hill Capital Partners has announced it will acquire Checkers Drive-In through a $525 million deal. Last week, Restaurant Brands International bought Popeyes Louisiana Kitchen for $1.8 billion. Then there is Darden Restaurants, which is planning to buy Cheddar’s Scratch Kitchen for $780 million.