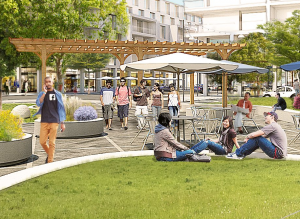 Billions of people on social network use Facebook and now the company wants to attempt to create a community in today’s real world.

Late this week, Facebook unveiled its huge new construction project to be built at its corporate campus in Menlo Park, California.

The site, which is 56-acres in size, is directly in front of Facebook’s headquarters. It will have housing of 1.6 million square feet totaling 1,500 units.

The plans were announced through a blog post that Facebook wrote of its future development that it called mixed-use village that provided residents, many who will be employees at Facebook, with housing, transportation as well as other amenities.

Facebook wrote that it planned to build retail space of more than 125,000 sq. ft. that included a pharmacy, grocery store and more community facing retail.

The new development is going to include a hotel said a local paper in the area.

It will take as long as one decade to complete construction. The first phase includes a grocery store and initial housing that will completed by the first six months of 2021.

While the majority of housing will go to employees at Facebook, the company is opening that housing to the community. The housing will be market rate as well as affordable housing with 225 new units or about 15% with prices below the current market rate.

Part of the vision of the company is creating a neighborhood center in which it gives the community services that are long needed.

One benefit having the employees living close to the campus is a lack of time sitting in traffic, said the blog post.

While Facebook presented its plans to the Menlo Park City Council, they still are not approved as of yet. The company is expecting that the approval process will take less than two years.

Many companies, especially those in Silicon Valley, are building large areas in and around the workplace in hopes that workers will be more relaxed while at work which human resources experts say in turn increases their productivity.