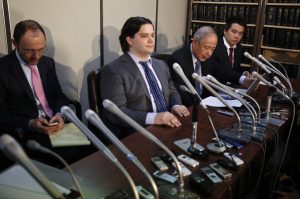 The chief of Mt. Gox the bitcoin exchange based in Japan will appear on Tuesday in a Tokyo courtroom to face charges of embezzlement.

Authorities suspect Mark Karpeles, who was born in France, of accessing the computer system of the exchange in February of 2013 and increasing his account by over $1 million. In August of 2015, he was arrested and months later freed on bail.

In October of 2016, he resumed his Tumbler postings and has answered questions on occasion about the bankruptcy of Mt. Gox. He denied any wrongdoing. If he is deemed guilty he could be sentenced to up to 5 years behind bars or a fine of 500,000 yen, which is equal to about $4,000.

At the time that Mt. Gox closed during 2014, Karpeles announced that larges sums bitcoins worth millions of dollars had been unaccounted for.

People that were affected by the failure of Mt. Gox are still attempting to obtain lost funds. Based upon discussions on chats rooms in social media many remain hopeful that they can find out more details during the upcoming trial.

The failure of Mt Gox stunned the bitcoin world community. Critics have said that the debacle spotlights the risks of transaction involving bitcoins, while proponents of the cryptocurrency contend that Mt. Gox was only an exception.

When Karpeles was arrested, authorities in Japan said the case baffled them because they never had dealt with crimes that involved bitcoins, which central banks do not issue.

Even though one of the largest exchanges of digital currency was Mt. Gox, experts said it may be hard taking any action due to lack of any laws that cover virtual currencies.

Over the period of almost two years since that happened, Japan enacted new measures to regulate the bitcoin and other types of cryptocurrencies, whose usage has expanded rapidly the last few years.

One of Japan’s largest electronics retailers is Bic Camera and it has started to allow payments using bitcoins at three outlets it has in Tokyo.

The Japanese government has also spelled out the regulation for bitcoins to prevent their misuse for terrorism or any other type of illegal activities that includes requiring banks as well as other organizations to verify users’ identities, record and to report any transactions deemed suspicious.

The new regulations implemented this past April require traders in virtual currency to keep the assets of customers separate from theirs, in part because of losses that occurred in the bankruptcy of Mt. Gox.