Carolyn McCall Back in Media Industry to Run ITV 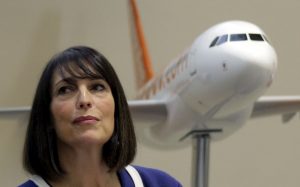 When Carolyn McCall left the media industry for the airline world in 2010, publishers of newspapers were being sieged from the shift of advertising to online products that took advertising revenues away from them.

She is returning to run ITV, just as that same battleground has turned to television.

Advertisers from cosmetics to cars to food and finance are being squeezed first by Brexit and a slowdown of the overall UK economy, while being busy shifting their ad dollars for television to YouTube and Facebook while reassessing their budgets for marketing.

Meanwhile, viewers are tuning their stations to Amazon Prime and Netflix as advertising for television has been forecasted to fall 2.7% in 2017 across the UK said GroupM an industry researcher. The last time there was a decline was during 2012.

ITV hopes that McCall, who is 55 and leaving her position as the easyJet CEO, will come up with answers to the fleeing advertising revenue and return the struggling business to growth again, when she begins January 8.

The largest free to air UK commercial broadcaster decided on McCall instead of a host of other high-caliber candidates according to ITV Chairman Peter Bazalgette.

McCall’s experience leading Guardian Media, which is the owner of the The Observer and The Guardian newspapers, makes her suited to tackle the current challenges said an analyst with a UK securities house.

The analyst added that McCall knows the key issues that are facing the traditional media industry today due to having relevant experience in the sector.

ITV was up by 3.8% in midday London trading, the biggest increase in over three months, while easyJet fell 0.3%.

McCall will be running a business at ITV that is in the news annually as being a takeover target. Liberty Global, owned by billionaire John Malone, owns approximately 9.9% and was tipped as one of many potential bidders, and that speculation has intensified since the vote last year by Britain to leave the European Union.

Arresting a decline recently in advertising sales, improving the quality of online video offered by ITV and warding off challenges from offshore streaming services such as Netflix will be top priorities for McCall, said an analyst in London on Monday.

McCall will be joining a company that generates less revenue than does easyJet yet has a higher value of stock. ITV had revenue of £3 billion ($3.9 billion) in 2016, while its market capitalization was £7 billion and easyJet’s sales reached £4.7 billion but its value was £5.6 billion.