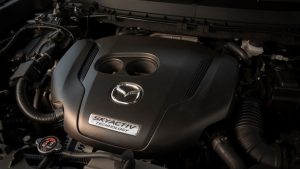 Japanese carmaker Mazda Motor Corp. has unveiled its plans for the first ever commercial gasoline engine that uses compression ignition, that places traditional engines at the head of its strategy only days after announcing it would be developing a lineup of electric cars with Japanese based Toyota.

Mazda, whose research & development budget is just a fraction of Toyota’s, could become the first carmaker to commercialize this technology that many of its peers including Daimler and General Motors have worked on for a number of decades.

On Tuesday, Mazda announced that it would begin selling vehicles that are equipped with its new engine starting in 2019, even as other carmakers increasingly shift to the electric vehicle against tightening regulations over the environment.

Mazda’s R&D head said that the company believes it is imperative and fundamental for it to pursue this internal combustion engine.

While the electric engine is necessary, what should come first is the internal combustion engine, said the R&D head at Mazda.

The news comes after last Friday’s announcement of a link up with Toyota that will see both build an assembly plant in the U.S. worth $1.6 billion to work together making electric vehicles.

Mazda said that the new engine, which will be given the name SKYACTIV-X, is going to be between 20% and 30% more efficient that the current engine in its vehicles the SKYACTIV-G.

Mazda also said that electric vehicles would start to be introduced along with its electric technology in 2019, focusing on markets where there will be a restriction on the sale of other vehicles or provide a clean source through electric power.

The Tokyo based automaker said as well that it was aiming at making technology for autonomous driving standard in all its models beginning in 2025.

With new restrictions being made by regulators in many countries in Europe automakers have ratcheted up their electric engine technology knowing they will have to have alternatives ready on a mass level within the next couple of decades to comply with the changes made by policymakers.

The U.S. has yet to make any announcements relative to regulations about gas powered engines but it is expected that at some point in the near future that will be announced.