Priceline Plunges on Weak Outlook Even with Strong Earnings 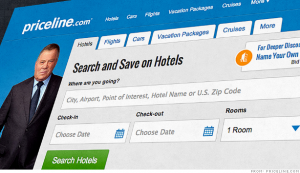 Priceline Group Inc. shares fell by nearly 7% in trading after hours on Tuesday, as a poor forecast for its upcoming quarter worried investors despite an earnings beat for the second quarter.

The booking site for travel posted adjusted earnings for the second quarter that reached $15.14 a share, which easily beat analyst estimates of adjusted earnings per share of $14.19. Priceline revenue reached $3.02 billion, which also beat Wall Street’s expectations of $2.99 billion.

However, the booking company said it was expecting earnings from $32.40 to $34.10 for its third quarter, which were short of guidance given by Wall Street of $34.15 per share.

The strength for Priceline in the second half of last year sets up the company for challenging comparisons over the upcoming two quarters.

CFO at Priceline Daniel Finnegan during a conference call with investors said the comp is quite difficult. Night bookings increased by 29.5% and 31% during the third and the fourth quarters respectively in 2016. Revenue was up by 18.9% and 17.4% during the same two quarters of last year.

Priceline CEO Glenn Fogel said that the deceleration was consistent with trends over the long term and with the company’s size.

While the upcoming two quarters might be challenging for the company, the CEO at Priceline said macro factors like the shift from travel spending offline to online should be a help to the company.

Fogel added in his conversation with investors that Priceline still has a very large market opportunity.

The most important travel market for Priceline is China, said Fogel, saying that the company invested in Ctrip.com a local travel business in the Asian country.

Asia, added Fogel was a huge opportunity for the entire travel industry due to many of the people there becoming travelers for the first time. When there is dramatic growth opportunities, there are many players that entire the playing field and those that come in have large sums of capital.

While the CEO did not mention any particular company, its rival Expedia has invested more than $350 million during July in Traveloka an Indonesia company.

Despite the tumble in afterhours trading, Priceline stock remains 30% up for 2017.