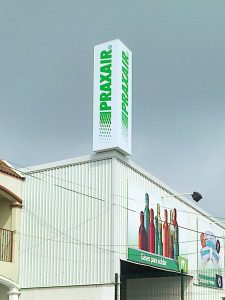 Praxair Inc. (NYSE:PX) and Linde AG (FRA:LIN) have announced their intentions to join forces to create the industrial-gas industry’s biggest player. Praxair and Linde make gases used in all sorts of industrial applications, as well as in manufacturing and food production. The merged company would have a combined market value of $66.6 billion and about $30 billion in annual sales before divestitures.

The merged company will reportedly be called Linde. Praxair Chairman and Chief Executive Steve Angel would be CEO of the new company. He would remain based in Danbury, Connecticut. Linde Chairman Wolfgang Reitzle would retain that role. The new board would have equal representation from both companies.

The new holding company would be domiciled somewhere in the European Union, though the two companies didn’t say where. The merged company would also maintain facilities in Germany. Praxair committed to preserving jobs in Germany to win the backing of Linde’s directors. The companies promise $1 billion in annual cost savings from joining forces.

The combined company will have a dual New York and Frankfurt listing. Linde shareholders would receive 1.540 shares in the new company for each of their existing shares. Praxair shareholders would receive one share in the business for each of their shares. After the deal was announced, Linde shares were trading 1.8 percent down in Frankfurt. Praxair shares were down 2.4 percent in premarket trading in New York.

The two companies reported that both boards endorsed the combination. However, regulators around the world still need to approve the merger plan. The deal still requires customary shareholder approval as well. The companies said there is no guarantee the deal can be completed.

Linde and Praxair are currently the industry’s No. 2 and No. 3 players respectively, behind industry leader Air Liquide SA of France. Air Liquide reached the top of the industry pack in May after purchasing U.S.-based Airgas Inc. for about $10 billion. That move dethroned Linde, which had held the position since its $14 billion takeover of the U.K.’s BOC PLC in 2006.

The merger announcement follows a two-year courtship between the companies. The companies first discussed a merger two years ago but put those talks on hold after Linde issued profit warnings. Talks were revived this summer, but foundered over the makeup of any combined company. The breakdown of talks led Linde Chief Executive Wolfgang Büchele to quit and he was replaced by Aldo Ernesto Belloni. Praxair moved to rekindle talks in November.