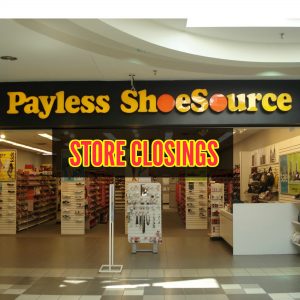 Payless ShoeSource has become the latest major retailer to file for Chapter 11 bankruptcy. Payless chief executive W. Paul Jones released a statement saying, “This is a difficult, but necessary, decision driven by the continued challenges of the retail environment, which will only intensify.” His statement continued on to say, “We will build a stronger Payless for our customers, vendors and suppliers, associates, business partners and other stakeholders through this process.”

Payless was founded in Topeka, Kansas, in 1956 and has expanded to about 4,400 locations in more than 30 countries. The company calls itself the “largest specialty family footwear retailer in the Western Hemisphere.” Payless’ parent company was purchased by private equity firms in 2012 for $2 billion. The sale left the company saddled with debt.

Speculation had been building that Payless would soon file Chapter 11. The company has a crushing debt load and has struggled with weak sales. According to the filing, the retailer had liabilities between $1 billion and $10 billion and roughly $500 million to $1 billion in assets. The company has a $520 million term loan that would come due in 2021 and another $145 million loan due a year later.

The company announced a restructuring plan that will result in the immediate closure of 400 stores in the United States and Puerto Rico. Further closures have not been ruled out. The company said that it will “aggressively manage the remaining real estate lease portfolio.”
Jones saidin his statement, “We are confident that this process will also enable us to leverage Payless’s existing strengths to succeed.”

In its statement, Payless said it will reduce its debt load by almost half. The retailer has also negotiated agreements to obtain up to $385 million of debtor-in-possession financing with some existing lenders. That amount includes $305 million of asset-based financing and an $80 million new term loan.