Smaller Stores and VR Could Be Ikea’s Future 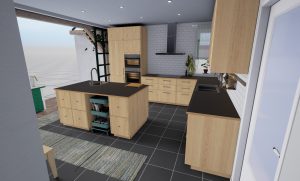 Swedish retailer Ikea is embarking on a number of experiments in retail along with technological innovations that it is hoping will keep its shoppers returning.

The emphasis on experimenting comes as many retailers, especially those located in the U.S., are coming under heavy continual pressure from giants in e-commerce such as Amazon.

The digital transformation leader at Ikea Michael Valdsgaard said the company understands the world is going through a change and the expectations of the customer are changing and Ikea wants to continue to be a relevant in the retail space.

He added that Ikea is trying as many things that are possible to see what ones work.

That is the thought behind one of the key initiatives at Ikea: A new pilot program that will launch in 2018 allowing the company to sell its furniture through third party online sites.

The retailer also has other ways it is working to maintain pace with the changing habits of shoppers.

Augmented Reality is one. Ikea along with Apple are planning an app for augmented reality that allows customers to visualize what the products at Ikea will appear like in their homes prior to purchasing them.

This app, which is scheduled to be released this fall, would allow shoppers to have a virtual preview of furniture at Ikea in 3D in their home prior to making a commitment to purchase.

Valdsgaard said that customers would at first be able to look over between 500 and 600 items on the app, and new ranges would be added as they come available.

Ikea has encouraged shoppers dating back to February to test a new virtual reality app in-store that allows them to explore a new Ikea kitchen and to make virtual pancakes.

The VR experience is only available at four places while it is being test with consumers.

Ikea has always had large big box type stores that it locates in suburbs.

However, it began opening outlets that were smaller and were located closer to the centers of cities about two years ago.

The chain now has 44 of those type stores that are about only 10% the size of a typical Ikea stores and can be found in the UK, Norway, Italy, Canada, China and Japan.

Customers can place online orders and then pick up their purchases from a store that is close. For the majority of consumers, the closest Ikea store is a long distance away and the company is developing this new concept to enable more customers to be within the Ikea range, said a company spokesperson.