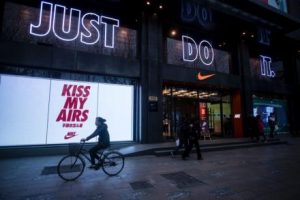 Nike announced its new business structure that amongst other changes will involve the cutting of 2% of its global workforce.

In a prepared statement on Thursday, the sports apparel retailer said that Nike’s organizational and leadership changes will help streamline as well as speed up new strategic execution. The statement also explained the plans Nike has of how it will change its reporting divisions within the company.

These changes, said Nike are expected to reduce the overall workforce by 2%. As part of the changes, up to 1,400 employees will likely be let go. Nike as of May of 2016 employed over 70,700 people worldwide.

Share of stock at Nike fell during Thursday morning trading by over 2% following the company’s announcement.

Along with shrinking its workforce, Nike created what it named a Consumer Direct Offense, or a plan to be faster to serve shoppers with options in customization.

In this new alignment, the sports apparel maker will focus on serving consumers across 12 cities, in 10 countries with the locations representing more than 80% of the projected growth by Nike through 2020, forecasted the retailer.

Nike added that it was trying to simplify the company’s geography structure and is changing to four from its prior six reporting segments: North America, Middle East, Africa and Europe; Asia Pacific and Latin America; and Greater China.

The financial results at Nike will be posted based on those four segments starting in its 2018 fiscal year, said the company.

Through our new Consumer Direct Offense, we are becoming more aggressive in the digital marketplace, by targeting important markets and delivering product even faster than before, said Mark Parker the CEO of Nike.

In the athleisure and footwear space, Nike is considered to be a strong player related to its offering of customizable product, and the announcements on Thursday by the apparel retailer show it is doubling down on that effort.

A big push during the coming months toward mass customization is expected with new products as well as more interesting experiences digitally within its business, said a Nike statement.

The Express Lane at Nike, which fulfills product as a response to demand from consumers, will launch this summer in China.

Nike said it was also planning to combine its site Nike.com, its retail channel Direct-to-Consumer and its digital products company Nike+.