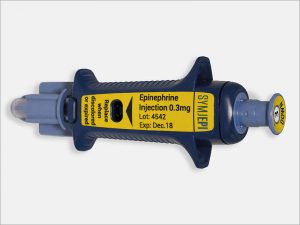 Regulators from the U.S. Food and Drug Administration approved competition for the emergency allergy medicine EpiPen that put Mylan into the spotlight for pharmaceutical greed.

This week the FDA approved a product from Adamis Pharmaceuticals Corp that should be on sale by the latter part of 2017.

Symjepi is a syringe that is prefilled with epinephrine a hormone that helps to stop allergic reactions that could be life threatening from insect bites and stings, foods like eggs and nuts or certain types of medications.

Adamis, based in San Diego, says its new product is easier to apply than the EpiPen by Mylan which is spring loaded and filled with a set dose that has a training device.

Symjepi is smaller than the EpiPen is, so it is easier to put into a purse or pocket. The majority of adults and children with severe insect or food allergies always have the device with them while leaving another spare back at home, work or school.

Adamis said a distributor is still being lined up so it does not have an exact price for the new product, which will like EpiPen be sold in pairs.

A spokesperson for Adamis said that the Symjepi will be an alternative that is low cost to the EpiPen and other products that are similar. The spokesperson added that the company was hoping to sell it for less than the EpiPen generic version.

One pharmaceutical analyst said the Symjepi is not identical to the EpiPen so the price set by Adamis will be important.

Currently, the EpiPen costs between $630 and $700 without any insurance, while its new generic version has a retail price of between $225 and $425.

Mylan, which is headquartered close to Pittsburgh, launched its generic version of the EpiPen in December of last year trying to deflect criticism that was mounting.

Last summer, Mylan was heavily criticized for the repeated times it raises the prices of the EpiPen and Heather Bresch its CEO appeared before a Congressional panel.

Analysts estimated that to produced two EpiPens the cost is no more than $20. While the EpiPen had other products competition against it, doctors usually prescribe the EpiPen due to it being well known.