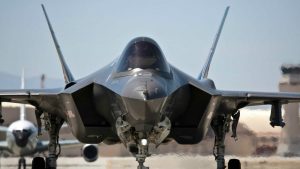 Lockheed Martin Corp. is nearing the final stages of a deal that is worth over $37 billion to sell 440 F-35 fighter jets to 11 countries including the U.S. said a pair of sources aware of the talks.

It would represent the biggest deal to date for the F-35, which makes its debut at the Paris Airshow this week.

The likely sale marks a big shift in sales practices from purchases annually to more economic deals of multi-years that lower the unit cost of jets.

The pricing of the F-35’s is not yet final, although the price on average for the 440 jets will be $85 million, said those aware of the sale who asked for anonymity due to the negotiations not being made public yet.

This multi-year deal involving the fighters will have three deliveries over the 2018, 2019 and 2020 fiscal years.

A representative with Lockheed said the company has a policy of not discussing negotiations related to contracts and that any deal that involves block purchases would be announced by the federal government.

Last week, the 11 nations for the F-35 met in Maryland to discuss the terms with Lockheed and to tour Northrop Grumman facility that makes equipment for the F-35.

The countries involved in the block purchase are Australia, Israel, Denmark, Italy, Japan, Norway, the Netherlands, Turkey, Britain, South Korea and the U.S.

The memo of understanding that was being negotiated between the 11 nations and Lockheed looks to procure 135 or more F-35 jets during the 2018 fiscal year for delivery during 2020 for a price per jet of $88 million.

In 2019, the average price would be $85 million for the A variant F-35 and could fall to less than $80 million for 2020. That would be the lowest price the F-35 has ever been available for, making the deal a big step in lowering each jet’s overall cost.

The F-35 has received a great deal of criticism by those who say it’s too expensive, including President Donald Trump and other officials from the U.S. who criticized the most expensive program at the Pentagon for its many cost overruns and delays.

Just recently, 25% of the operating fleet of the F-35 was grounded because of the irregularities found in the oxygen supplies for the pilots.

JOE Trading Down 0.1% This Week